The CESI conference is one of my favourite events of my school calendar year.  It’s one of the only events where I leave feeling absolutely invigorated, full of new ideas and motivated by the power of ICT in education.  Every year there are excellent talks, workshops and speakers.  For the last couple of years, I hope that I add a little drop to that enthusiasm with the workshops I have given.  This year, I gave a workshop, entitled: “Why Blogging is Best”.  The workshop’s aim was to promote the blog as a primary school’s web site rather than the static model that is outdated and more difficult to use. 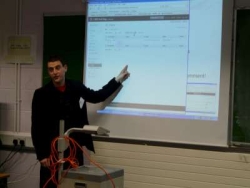 Blogs are part of the Web 2.0 phenomenon that have spread to homes around Ireland.  Almost every digital native has a social networking page, has expressed an opinion in a forum and some even keep an online diary or personal web site in the form of a blog.  So, what is a blog and why are classrooms in Ireland starting to stand up and take notice?

A blog is simply a web site.  However, the features of a blog that separate it from a tradtional web site are:

Blogs are particularly suitable to primary schools for all the above reasons – particularly the last one.  There are many schools that are now converting their old web sites into blogs and the NCTE, the government agency that leads ICT in education in Ireland, is promoting the use of blogs by launching a free service for all schools.

Over the last couple of years blogging has been introduced to primary schools.  As with any new system, it has had to defend itself against the perceived norms.  Web design has been around in Irish primary schools for around 15 years and all web sites were based on a static model.  Whether a school used Frontpage, Dreamweaver, or more recently, WebsiteX5, these packages were often difficult to maintain and usually necessitated that teachers also have some graphic design skills.  The latter package mentioned, WebsiteX5, promised users a web site in 5 clicks, and was very well received by many schools.  However, blogs are finally becoming recognised as much more effective and easier to use.

Critics (and defenders of the static model) have claimed that the blog is insecure and difficult for the average teacher to use.  However, Blogs are very secure and much easier than static packages for the average teacher to use.  If I had any doubts, the workshop assured me how wrong these critics were.  From the gasps and positive comments, teachers were in disbelief about how easy it all was.  Another privilege for me was the fact that I was allowed to use Scoilnet’s blogging service to demonstrate.  I would heartedly recommend every school to take up the service by ringing the NCTE helpdesk.