I recently completed my thesis as part of my Msc. Educational Technologies. The focus of the research was on using customised software within a VLE (virtual learning environments) or LMS (learning management system) to teach maths to sixth class. Initially I planned to distribute my software on a CD, but changed my mind once I started to read up on the research about the Net generation.

Who are the Net generation?

The Net generation are those children and teens who have grown up with technology. Other terms used to describe the Net Generation are “Digital Natives” or “Homo Zapiens”.  They have certain traits and learning preferences.

Traits of the Net generation
The net generation is digitally literate – they are comfortable with the technology. They intuitively use media text and audio and have the need to be connected always as networking is important to them. Speed is often more critical than accuracy and they have faster response times and multitask often. They learn well through discovery learning by exploring for themselves or with their peers. Social aspect of learning is important as they gravitate toward activities that promote and reinforce social interaction. For us as educators it is crucial to understand that these traits lead to learning preferences different from our own.

Why VLEs at primary level?

Networks are the “fundamental underpinning structure of social organization” Castells as quoted in FutureLab et al (2006) report. This networking is happening in a real and virtual environment outside school today and teachers can utilize the developing social-networking culture to encourage learning. Social networking sites have become an integral part of children’s lives today, even at primary level. 60% of my class had a BEBO site when surveyed.  The age range was between 11 – 12 years.  Moodle is a popular VLE used in schools worldwide. It is open source software which means the software is free, an important consideration for most schools today. However there are associated costs such as hosting. After discussion, a Pilot project was set up in conjunction with Tralee Education Centre to use the centre’s Moodle VLE to host my application Digimaths. The school did not have a computer room but the children used the computers at the back of the classroom during breaks or when finished activities. As each child did not have access I used a blended learning approach where the topic was introduced using an overhead projector. Blended learning is recommended at primary level.

Moodle courses are very easy to set up and maintain. A course can be set for each class or for each subject. Resources and activities can be added or updated easily. 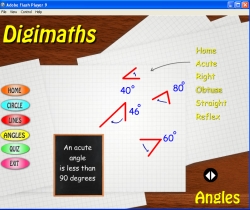 Digimaths was set up as a resource within a course called sixth class maths.  The students were also able to access other educational maths games and assessments from the VLE. Moodle is compatible with different standards e.g. IMS , SCORM or AICC packages.

This is the feature that I utilized most. Learnt helplessness means that a child can convince themselves that he cannot do something even though he has the ability to do it. This is especially true for maths. This learnt helplessness was targeted by improving self efficacy. Moodle self assessment tool was used for revision.

Quizzes allow for self paced instruction and if the feedback is used correctly the pupil can progress at his/her own pace. This assists a student’s motivation and self efficacy. The students who used this facility the most were the average to low average students at maths and most showed a considerable improvement in their standardized tests.

Quiz feature offers multiple choice, true/false, cloze, short answer and numerical type questions.  Quizzes are easy to use.  A question bank is set up and quizzes are then created  from this question bank. The facility for random answers is available. Quizzes can be set to randomly select from a question bank so each student is given a different quiz or each attempt by the same student gives a different set of questions. Quizzes can also be timed to discourage cheating if using the facility outside school.

Each student had a unique user-id and password. Personalization in the form of their profiles gained the attention of the students and they immediately saw the VLE as a “Fun” environment. The main roles within Moodle are administrator, teacher and student. The administrator controls the site. The teacher role can have various responsibilities from being able to access predefined courses to course creation. Customized roles can also be created.

There was an increase of 6.6% in the standardised test results of the participants. The biggest increase was seen in those students in the 27 – 50 percentile where increases ranged from 11% – 31%. It must be noted that most of the children in this range also attend learning support. Children’s’ attitude to maths improved and the children felt that this method had assisted their learning in maths.

I plan to use set up a Moodle site at the school next year. Though I used Moodle to teach maths it could also be used for any of the other subjects. The children can upload their work for others in the class to see. Moodle also has a very good tracking facility and a teacher can see at a glance which students logged on and what they did online and what grades they achieved. Moodle can be used by all teachers from beginner to advanced level of computer experience.  Moodle offers most web 2.0 tools from forums and chat rooms to blogs and RSS feeds, both of which were discussed at the CESI conference. I recommend Moodle to any school as it connects the classroom to the children’s world outside school.