My use of the Nintendo DS in the classroom came about as a result of an off-the-cuff remark from a restless child in one of my group math sessions with some SEN children. The children in question, although well behaved, found it hard to sit and concentrate for any length of time and rarely completed activities without constant reminders to stay on task. I had tried many of my usually successful strategies to motivate with little or no success and then one day, earlier this year, came the break-through.

On passing my table, one of the group commented on my “cool” Nintendo DS which she had spotted in my open bag (the DS has a purple metallic cover, which seems to appeal to both boys and girls for some reason). A lively discussion followed on the various DS games and it was agreed with the Principal, later that day, that the children could bring in their own DS the following week, on condition that a specific learning objective was identified for the use of same.

Thus began my fascination of how a small cleverly designed handheld game called “Maths Training” could enhance learner performance in mental maths, speed and accuracy of calculation in addition, subtraction, multiplication and division operations. Through the game the children have become confident in the use of the “hundred-cell method” pioneered by real-world professor Hideo Kageyama. The children often discuss with me how this particular game has helped them to become “faster and better” at their sums and table tests.

I gradually extended the use of the DS to other areas of the curriculum, larger groups and eventually to the classroom itself as players can challenge up to 15 others by using DS Download Play on a single Game Card. The enjoyment and achievement factor contributed to the children’s personal and social development. I have found that children learn to work together, sometimes leading and other times following, thus engaging them in decision-making, being supportive of their peers and developing positive relationships. Their concentration improved also and all were highly motivated to improve on their personal scores, which in turn built greater self-esteem. 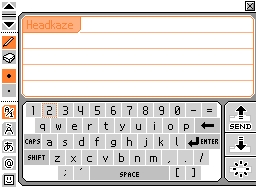 The Pictochat facility of the DS can be used for collaborative writing in any language. Possible approaches include:

Useful learning objectives can be identified by questions such as “Who plays a game that relates to what we are discussing?” “Can you think of an example of this in your games?” and “How would we design a game like this?” I often use Pictochat as a plenary exercise, to reflect on what was learned /achieved during the games.

More tips can be found at http://www.ideastoinspire.co.uk/nintendodsdsi.htm . Thanks to @tombarrettwho encouraged “tweeters”, using the DS in the classroom, to share their ideas with others.

Nintendo has developed a new system that allows educators to easily produce and distribute DS content in schools. To use this system, the school would have to install the required software on their computers and have wireless LAN set up in their classrooms. Teachers would prepare learning materials on the computer and  these materials could then be transferred wirelessly to  students’ DS consoles.  Read more about these developments and some sample uses athttp://www.andriasang.com/e/blog/2009/06/09/nintendo_ds_classroom 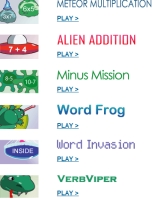 I have also started using the Wii with my SEN children and it’s hard to know who is having more fun – identifying, visualizing, memorizing, computing and analyzing – the teacher or the students. The Wii offers a combination of fun video games and real physical activity. The game Big Brain Academy tests children’s abilities and speed at solving various problems, involving skills like counting, recognizing patterns, and size comparisons.  I have used my Word Coach to develop vocabulary with older children and many of the Wii Sport activities can be used during Math or PE.

The children love viewing their photos taken with their digital camera and my mobile phone on the Photo Channel. We used it last term to identify the images we intended to  use in our Photo Story 3 Projects.

Connecting the Wii to an existing wireless Internet connection will allow you to watch the news, check the weather and surf the Internet. The Weather and News Channels, which are preloaded and free to use, are particularly suited to teaching Geography and helping children to develop an interest in current affairs.

Learning games are becoming more and more popular. “Games can lower anxiety, thus making the acquisition of input more likely” (Richard-Amato 1988:147). They are highly motivating and entertaining, and they can give shy students more opportunity to express their opinions and feelings (Hansen 1994:118). With this in mind, I bought 1000 Wii points (€10) in order to download the “Internet Channel” for the Wii, as I wanted to access the games on http://www.arcademicskillbuilders.com/wiilist.htm for the younger children. Games, as an educational tool, have also been identified by @markw29 ‘Games to Enhance Learning’http://www.ideastoinspire.co.uk/games.htm .

In conclusion, the Wii and the DS, in my opinion, are great affordable tools to integrate into the curriculum as they are student centred. They help to build class cohesion, to foster whole class participation, to promote independent learning and healthy competition. We teachers are all working with students for whom interacting with some sort of screen is second nature. I personally like to take advantage of that when I can to make learning engaging for today’s students.