The twenty minute walk from Lamu Boys’ Primary back to our accommodation in Yumbe House goes right through the centre of the town. Every building to the left and right on the main street has a busy business of some kind, a lot of high quality wood carving and furniture manufacturing, dozens of small shops selling food and water, lots of tourist stuff as tourism is the main source of income in Lamu, lots of textile shops where you can get a shirt or dress tailor made for you for less than €20, the odd Internet cafe, plenty of places to eat, lots of small hotels, hostels and so on. Nothing too surprising and what you might expect from a busy small town on an island in the Indian Ocean off the coast of Kenya.

There are one or two differences though from what I’m used to here in the great metropolis of Clane, County Kildare. In most places the main street is about 2-3 metres wide, that’s 2-3 metres from the door of one shop to the door of a shop across the street. In some paces I can touch both sides of the street at the same time. There are no cars on the main street and this isn’t explained by the fact that they wouldn’t fit. In fact there are only a few motorised vehicles on the whole of the island one of which is an ambulance ‘tuk tuk’, a tuk tuk being a kind of taxi built on the back of a scooter. Transport here is by boat or by donkey and pretty much everywhere you go there is a donkey or two within eye shot. 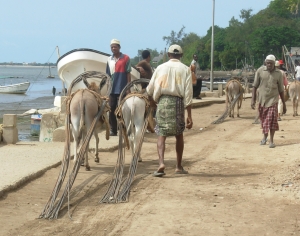 Considering all the building materials get from one place to another on the backs of donkeys, I reckon the donkeys are glad that most of the building work going on round the town tends to be on a small scale. Donkeys laden down with bricks and steel are a common sight along with those carrying crates of Coca Cola, food and pretty much everything else that needs to get from A to B, including people. But most people walk.

Another difference is of course the weather. The comedy series “The Fast Show” used to do a regular sketch of the weather forecast of some Mediterranean country where the forecaster would slap little pictures of a blazing hot sun on various parts of a map and declare that the weather would be “scorchio”. Well that pretty much covers it here even if we are here during what passes for winter in Kenya. While I’m impressed with myself that I can walk about in this heat, albeit with a wide brimmed hat and factor 50 sun cream applied in think layers from head to toe, down on the quayside men are unloading boats of sand, walking back and forth for hours at a time, knee deep to the boat to collect a large basket of sand that they carry back to the quay on their heads.

It took a while for me to be sucked into the idea of heading to Africa. Camara had come to my attention through the Irish Linux Users Group mailing list ( http://mail.linux.ie/mailman/listinfo/ilug/ ) where some discussion was taking place about Camara’s use of open source software to promote educational opportunity in African countries. They needed volunteers to help refurbish computers donated by individuals and companies. I figured that was right up my street and started lending a hand for a while once a week. Around this time a parent of one of the students in the school where I teach dropped in to see me as he had noticed we were using edubuntu on computers in recreation areas. The parent was Cormac Lynch, CEO and founder of Camara. We got talking of what Camara was about and how the school might get involved at some level.

At that stage I wasn’t seriously thinking of joining the volunteers heading to Africa and figured I’d help out from Ireland, though curiosity was growing about what the reality of Camara’s work in Africa involved. By the time Kirsty Palfreyman put out the final call for volunteers on the CESI list back in March I was ready to take the plunge and signed up. During an interview with Hester Jackman I was asked if I had a preference about which country I would like to go to and had to confess it made no difference to me as I knew little or nothing about Africa other than what I had seen on TV. While I had travelled a couple of times to America and round parts of Europe as a student, my passport had expired ten years ago and hadn’t been used much in the ten years before that either so I figured it didn’t make much difference where I ended up, it was all a long way from Kildare.

We landed in Mombassa in early July with an itinerary that included a fortnight based in Camara’s hub in Mombassa, a week on the island of Lamu to the north of Kenya and a week in Malindi, a town on the coast about half way between the two. The team of twelve volunteers ranged in ages from early twenties to mid forties, included three teachers, people from the IT business community, and third level students. Though working in Ireland, three were from Spain and one was from France.

In each location we taught courses in word processing, spreadsheets, presentations, web design, Moodle, Linux, networking and PC maintenance. In Malindi we also worked with a group of five teachers on eLearning and the Internet. In Mombassa we taught mainly in the hub with classes being split into four morning and afternoon sessions. So in the morning one group might do Linux administration and then in the afternoon they would switch to networking. Another group would do office applications in the morning and then switch to PC maintenance or Moodle in the afternoon and vice versa. Numbers for each course in Mombassa varied from about ten to twenty five. 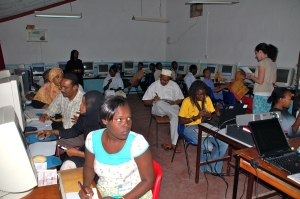 Why the heavy emphasis on skills and technology rather than ICT integration in education? Well because that is where things are at right now in Kenya. Schools need people who can administer and carry out basic repairs to their computers; before any real integration can take place they need basic skills and an understanding of what computers can do. This is something that is going to change over time and the needs that schools have will influence the kind of training that Camara will offer.

This year was the first year Moodle training was on offer and it was interesting to see how quickly teachers could identify this as a way of centralising and organising resources. Moodle needs to be on a network to be useful and there is a growing interest within schools to network the stand alone PCs they already have. Where schools don’t have Internet access, there was a lot of interest in networked access to an offline version of Wikipedia and teachers worked on how they could integrate the use of Moodle and Wikipedia on a network with no Internet access. As has been the trend in other countries the hardware comes first, then the basic skills and finally the toughest hurdle: ICT integration.

I spent two days in Ganjoni Primary School in Mombassa working with other Camara volunteers to install and configure a network with Moodle and the offline Wikipedia. Ganjoni has 1500 students and feeds a cooked meal of rice and vegetables to over 1000 of them every day. Class sizes run to about 60 students per class. I saw no discipline issues in my time there nor did I see any corporal punishment which is still normal enough. In discussion with teachers where it was suggested that other sanctions like detention might be used the reaction was smiles and giggles at our naiveté. Detention it seems would be seen as encouraging poor behaviour as the students would love to stay in school longer. In all the schools we visited, students wore big smiles and greeted us with choruses of “Jambo”, the Kenyan equivalent of “Céad Míle Fáilte”.

It is interesting to see how Kenya has leapfrogged certain technologies compared to Ireland. One very significant one is that very few people have a land line but mobile phones are commonplace. Kenyans have embraced mobile phone technology in some quite extraordinary ways. Follow this link for a short BBC videoof someone paying for some food in a shop using their mobile phone. This is going to affect the way that the use of the Internet grows. While in Kenya, I splashed out on a 3G USB dongle for Internet access. By installing a proxy server on one laptop and using a wireless access point we were able to have a mobile network with Internet access. The cost of using mobile Internet is about the same as Ireland which sounds ok until you appreciate that pretty much everything else costs about 10-20% of what you would expect to pay back home. Where schools did have internet access it was usually pretty unreliable, expensive and based on slow satellite technology. There is much excitement at the prospect of Kenyans getting fast cheap broadband access and this is seen now as a real possibility with the fibre optic connections that arrived into the port of Mombassa while we were there. This is a big news story in Kenya with daily newspaper articles on how this could transform communication systems and provide economic opportunities for those with the skills and training. The fibre running down from the Gulf lands in Mombassa and infrastructure is already in place to distribute access to neighbouring countries along the east coast of Africa. I’m looking forward to seeing how they manage to distribute this to schools and what impact cheap fast reliable Internet access will have. Bringing things back home a bit there are still schools in some rural areas in Ireland looking forward to the same thing. 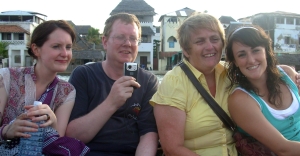 All good things come to an end but after four weeks covering myself in factor fifty sun cream, I have to admit I was glad to get back to some proper weather here in Ireland. I enjoyed my time in Kenya in the company of the other Camara volunteers and valued the opportunity to work with teachers there in their schools. It was interesting seeing the schools in action and how they organised themselves to meet the needs of their students and communities. I would highly recommend such a venture to anyone looking to do something worthwhile and a bit different. Head to www.camara.ie if you want to learn more and there is a chance to visit the Camara hub in Dublin, in the Digital Hub, before the CESI Autumn event on Friday evening, September 25th.