I spent the mid-term break in Sonderborg, Denmark, attending the 8th Asia-Europe Classroom Network (AEC-NET) Conference.  What, you may well ask, is that?  Let me try to explain.  AEC-NET was conceived in 1998 by the Asia-Europe Foundation, itself the only permanent institution of the Asia-Europe Meeting (ASEM) process. This latter is an informal process of dialogue and co-operation at governmental level, bringing together forty four countries of Asia and Europe including Ireland (http://www.aseminfoboard.org). As access to technology has improved and the means of using it have advanced, teachers and students use the internet both to collaborate and to display the fruits of that collaboration. For me as a second level teacher, it provides an opportunity to work together on projects with teachers and students in schools on both continents.

A project will involve a number of partners from Asia and Europe. For the majority of these students and teachers English is not their first language; all communication is however done through English. ICT plays a major role in the projects not least by way of internet access. Digital cameras both video and still have been used to great effect as students exchange work. 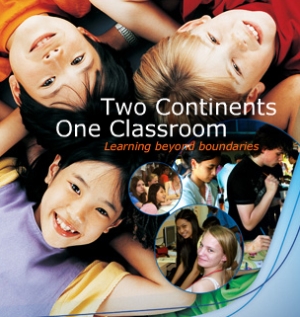 To provide some insight into what projects might look like, I will describe my involvement to date. I started out by co-ordinating a project entitled “How do your winds blow” in 2004. It involved both Asian and European schools doing work with their classes on weather measurement based on a common approach. For an agreed school week measurements were taken at each location, recorded and with synoptic weather maps sent to me. Photographs were also taken locally of weather conditions. I then collated the work and produced a simple website to display it. For the next three years my Transition Year students participated in a project called Mastering Media, during which they considered the print media. Again a week was identified during which the front pages of the national broadsheets were examined with international comparisons on what made the headlines. Students also exchanged DVDs of popular films and examined stereotypes within different cultures. Finally they considered how young people use technology in their everyday lives.  Work over the three projects involved research, questionnaires and exchange of information. As each year passed the sites gave more opportunities to the students to upload profiles and get to know each other, in keeping with developments in ICT.

In 2007 we joined a new project called Whazzup (http://aecwhazzup.ning.com/). Operating on the Ning platform, it is built around personal pages with forums, chat areas and the possibility of real-time discussion.  Teachers directed some of the topics for the forum so students exchanged information about festivities and musical instruments in a more formal way. Over the year it became a social space for students across the two continents to interact and was very popular. 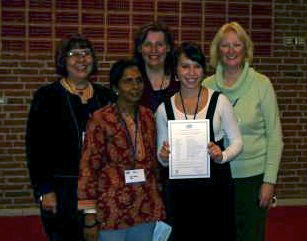 A conference is held each year, both to mark the end of one year of collaboration and to plan for the following year. The first one was in Singapore in 2001. The location of the conference moves between Asia and Europe. While much of the organisation is done through Singapore, local groups in the conference venue work hard to ensure the success of the event. The majority of attendees are practicing teachers and all are involved in projects either as co-ordinators or participants. Local costs are covered by AEC-Net, with a quota for each country. Representatives from Ministries of Education on occasion also attend. Prior to the conference, six projects are shortlisted to be presented to the conference. A judging panel then names the top three projects. This year Whazzup was one of the three while a project co-ordinated in Ireland and set within the LCVP (http://lcvp.slss.ie/), received an Excellence Certificate award. The photo shown opposite is of the winning Whazzup team.

A theme is chosen for each conference and presentations are made to that theme for the professional development of the teachers attending. This year the theme was “The Impact of Climate Change and Sustainable Development Within the School Community”. Talks addressing the issue were given by Ms Zhu Xianli, Economist UNEP Risoe Centre and Professor Søren Breiting, Associate Professor, Research Programme for Environmental and Health Education Aarhus University. Usually visits to local schools are included with introductions to cultural aspects of the host nation. New projects are presented with a view to getting partners to work on them in the following year. Twenty three were presented in Denmark. Participants commit on their own behalf and often undertake to bring the projects home to colleagues who may be interested in taking part.

I would like to finish by extending an invitation to you now as you read this article to consider signing up for any one or more of the projects proposed this year (http://www.aec.asef.org/). There are no lengthy forms to fill out. The target group is second level students.  It is great fun and an adventure for the coming year.