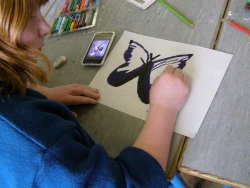 In March last year, St Aidan’s PS, Enniscorthy, purchased iPod Touches for the pupils in two of its 4th classes as part of an ongoing project involving schools attached to the Wexford , Kilkenny and Sligo Education Centres and Apple Ireland. The purpose of the project was to investigate the use of this technology as a learning tool in the classroom. This project proved so successful that it has now been rolled out to encapsulate all classes from 2nd to 6th. This covers 21 classes and over 500 children. We also have 30 iPads which are in use in our SEN classes.

Each child in the class has access to his/her own iPod and the class has a laptop to sync and charges the devices.  All classes have internet access with the addition of an Airport in the classroom to boost the connectivity speed. The iPod Touches’ internet access goes through the school filtering system so the children can surf in safety. We did however spend some time on teaching the children about internet safety.  On each iPod Touch we have downloaded a number of educational apps (software applications) that cover all areas of the curriculum.  We continually add to these apps as we discover different and better apps.  The children have begun to source different apps from family and friends. We use the iPod Touches most days. The length of time spend on the iPods in a day depends on the areas that we are covering. It varies from 10 minutes on a phonics programme to an hour on a SESE lesson.

The uses of the iPods are infinite and varied.  They have proved an invaluable tool in almost every curricular area from Maths to Visual Arts.  The iPods are almost replacing the text books in some subjects, with the books becoming only secondary sources of information.   The children have become very adept at using the internet to source data about given topics. They have learned very quickly to filter their searches to find information appropriate to their own level.  The children have also become adept at summarising and extracting what they need from the information they find. These are skills that are incredibly difficult to teach independently but which children are learning with ease by using the iPod Touches. 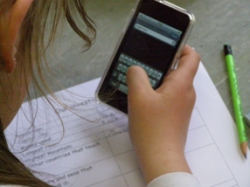 One area that we have really noticed signification progress is in the level of children’s oral language development. The children’s oral language skills are not only improving due to the use of apps explicitly aimed at language development but, also because, the children are finding more and more opportunities to talk about and explain their learning to their peers. This capacity for peer learning and peer support is proving to be incredibly effective in developing not only the children’s communication skills but also their collaborative working skills such as group work/ jig-sawing/project learning and their social/emotional skills. The children are so engaged in the use of the iPods that their drive to excel themselves, leads them to seek help from their peers on the one hand and give help on the other. The children become active participants and drivers of their own learning.

An Invaluable Teaching and Learning Tool

From a teacher’s point of view using the iPod Touches has put the learning right back into the children’s hands. Learning may be teacher directed but it is child driven. The children take ownership of their own learning. An additional plus is that concentration and behaviour difficulties virtually disappear as the pupils are totally absorbed by the task in front of them.  In using both the apps and the internet the children actually self differentiate so all the children are succeeding on their own level.

Using the iPod as a learning tool in the classroom is proving to be the single biggest change in teaching that we have encountered.  The uses are infinite and the learning potential is astounding. The only boundaries are the boundaries that you yourself put in place. Seeing the iPod Touches in action and the results we are getting speak for themselves.

Here is a video that shows the iPod Touches in action.

Some Comments from Students in our Classes

‘The iPods are brilliant. They are way better than just reading books’

‘The iPods are challenging but fun’

‘I like the iPods because they help me learn. Now I’ve learned things I never knew before.’

‘I think the iPods are great because they have some really cool apps and you can use the internet. I would love to have the iTouches again in 5th class. Goodbye books, hello iTouches.’

Some of the Apps that we use on a Regular Basis