The proliferation of digital multimedia has posed challenges and created new opportunities, and this is no more imaginable than where pedagogy is concerned. In 2010, a project was set up to provide archiving solutions to archive curators, content owners, education providers and users of digital media alike. 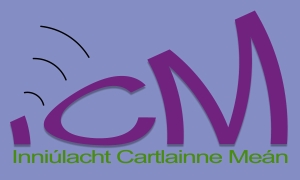 One key specialist niche of this nascent project is Irish-language media access and usability solutions. Critical digital tools designed and implemented now, rather than later, have the potential to enable a media renaissance and for this reason, form the focus for this discussion.

The requirements and challenges posed, however, are fundamental and necessitate building an infrastructure from the ground up. This point is central and crucial to understanding multimedia as it applies to Irish language material, and will, again, serve as a focus for discussion here.

It’s not possible to walk into a library and effectively browse its collection by Irish-language [Ó Conaire 2007 and Ó Conaire 2010]. Anywhere.

Creating an Irish language-centered educational media infrastructure poses a multi-faceted, and perhaps unexpected challenge. The first is quite predictable—the creation of a learning, media-creation and media-syndication environment is not an insignificant undertaking.

The second and more fundamental challenge (non-accessibility, summarized in the first sentence of this section)—which is largely unique to Irish language material’s usability—is to create a language-centered media infrastructure that overcomes language-specific archiving/access shortcomings that have been a feature of Irish-language archive material access to date. Among these shortcomings are:

Why are the above issues (bulleted points) important in a practical sense, to the average person? Some people have suggested that these issues are mere academic ones, which are not germane to the average person’s life—in other words, they apply to universities only. This notion should be deemed absurd because they are as important to the average person as the engine of a car is to someone who wishes to travel by car. You don’t need to know about the engine, but it does have to be there to locomote by automobile. To hide a language’s media is by far the biggest hindrance to its ability to function, and when the hindrance is a language-specific one, this is a suffocating impediment to the language itself.

All of the associated challenges, outlined above, are very tractable, and have been overcome in the case of the archives of other language collections, when archives have been treated language-specifically. In Ireland, there are no institutions that serve Irish-language material, and in fairness to national archives and libraries, this not incompatible with their missions, as they are primarily archive institutions of some nature or other. This, however, leaves Irish-language material “out in the cold,” as it becomes collected for the purpose of being lost, albeit with the best of intentions. Historically, this has been justifiable, as the number of traditional print Irish-language media could be easily counted in six digits. No single archive would have a holding of more than several thousand titles (even including titles only whose context was held). Proliferation of digital media—the way data can not only be stored in apparently infinite digital copies, but the manner in which it can be created and syndicated by everybody means that archiving practices to date will no longer serve language-specific needs of Gaeilge material. Crucially, as we can now search media (for example, a book) not only by its meta-context, but also by its actual entire content, simple or reductive indexing is a crude—even obsolete—tool in a digital media world; we need, therefore to be able to search the actual entire content.

Why make media more searchable and findable? The answer is quite simple: to make material (at least at the context-level, even if the essence is access-restricted due to copyright) accessible to the general public, rather than relying on individual archive managers who serve as de facto retrieval experts. 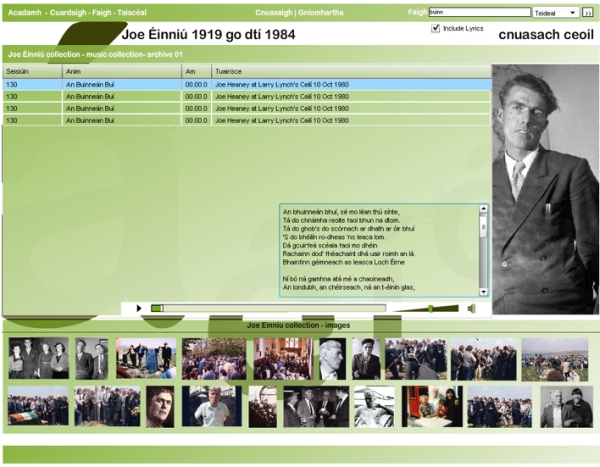 The Joe Éinniú Washington Collection, now in possession of the National University of Ireland, Galway is a wonderful example of an archive feeding invaluable material back into community and education. The Joe Heaney Collection was generously shared with his community (Carna) by its proprietors, the University of Washington Ethnomusicology Archives. As artist in residence at the University of Washington-Seattle from 1982 until his death in 1984, he recorded a significant amount of his ultimate repertoire there. NUIG-Carna now curates a copy of this archive, as illustrated by a screen shot of its interface, above.

ICT in education and archive infrastructures

An over-riding theme in many discourses on learning with ICT is the ICT itself rather that the pedagogical potential/breakthrough.

In using media as a learning tool (this has been discussed previously in the context of language acquisition [Ó Conaire 2010]), there is nothing new about audiovisual pedagogical transmission technology. In fact, it merely provides a reusable platform for the oldest and earliest-encountered form of communication—audiovisual communication.

In this context, facilitating use and reuse of multimedia is critical not only as an educational resource, but also as a fundamental cornerstone of language infrastructure. Language infrastructure, as it implies, is the physical framework by which knowledge and information is disseminated, syndicated and circulated. An impaired infrastructure means an impaired language.

And so, while the proliferation of social networking is embraced by many educators as an effective medium through which to engage students in various aspects of learning, it must be borne in mind where the fundamental building blocks of digital social interaction come from; with the exception of user-generated, in other words, original content, multimedia material is sourced from defined archives. Stated differently, social networks are secondary resources of material, which have many advantages such as auto-proliferation, whereas defined archives are primary resources and require committed resources to function.

In the same way, then, that libraries can be viewed as primary sources of traditional media—books and physical collections—and therefore vital to authoring material, identically, New Media can only effectively be created if there is a de facto contiguous repository of material from which to draw from. In a world where English is the super-language for common communication, archive resources are ubiquitous. It is easy to lose sight of the fact, then, that Irish functions more like other languages, in that it requires a language infrastructure that is widely accessible, but also specifically serves that language. With this primary infrastructure in place, it becomes possible then for secondary and tertiary archives to then use and reuse this multimedia.

The short movie below, entitled, “ag cruthú ábhar físe ó ábhar cartlainne” was created as a guide for teachers and educators—who may not have had much previous experience with New Media—to illustrate just some of the vast resources already available that can be reused as audiovisual user-generated and educational content.

Inniúlacht Cartlainne Meán (ICM)* was established in 2010 to bridge a contiguity gap between several interest groups who were in a position to mutually collaborate and benefit from cross-institutional cooperation, in providing a multi-use digital media platform. Some are educational institutions (from primary to post primary), to third-level (National University of Ireland, Galway), to commercial collaborators (Apple Ireland) to content owners (small archive owners to broadcasters). Although an alpha beta launch is not envisaged until this summer, several projects will launch in beta and for real in 2010.
*actually called IC*M, hence not Inniúlacht Chartlainne Meán 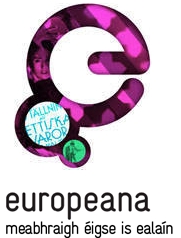 The Europeana cross-language motto, Meabhraigh Éigse agus Ealaíon, correctly indicates that Europeana is a portal to European cultural heritage. At the time of writing, no Irish language material exists on Europeana, even though it has an Irish interface. Happily, the first Irish-language broadcast material—a small, but significant start—will be available through the Europeana portal from launch day. 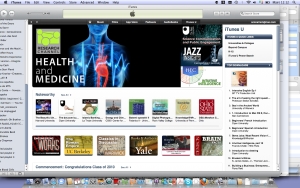 iTunes U, in its original 2005 set-up, was an educational platform for selected third-level instructions with educational content such as lectures and educational multimedia using the already-made iTunes Store as a platform for access and delivery. Since then, it has embraced other educational categories—along with universities, the iTunes U platform now includes:

ICM is in the process of setting an infrastructure in place that will serve a future iTunes channel; ideally, a collaborative iTunes U channel.

ICM launches its multi-faceted interface in 2010. Already working with national and international institutions, its fundamental role is to enable the production, dissemination and content reuse, as in the case of a traditional library.

Looking to the future, the current legal deposit situation in Ireland needs to be challenged. Irish-language material needs to have a unique in-cataloging system to reverse historical media atrophy. At the present time, legal deposit requires that printed books be deposited in eight Irish institutions and five British institutions. Yet there is not a single requirement for collecting Irish language material or cataloging it as a unique entity.  In the near future, legal deposit laws will need to be updated to deal with digital media and it will be at that time that a simple, sensible contiguity-aware solution will need to be implemented.

At the next CESI in 2011, we aim to present our fully up-and-running digital platform. Although without a web presence as of yet, keep an eye out for our beta-launch this summer, as well as peer into our individual projects-in-development. Information, tools and media will become available from July 2010 onhttp://www.fealsun.org.