In human–computer interaction, “WIMP” stands for “window, icon, menu, pointing device”, denoting a style of interaction using these elements. The term is sometimes used as a synonym for the more common “GUI”, or Graphical User Interface. WIMP interaction was developed at Xerox PARC in 1973 and popularized by the Apple Macintosh in 1984. Microsoft’s Windows 1.0 came along a year later and the rest, as they say, is history.

We’ve been digesting digital information through two dimensional window panes ever since. How many of us pine for the old command line interface? The blinking white cursor impatiently awaiting entry of a cryptic DOS command? Such text based interaction would no doubt seem extremely limiting in this day and age.

In 1990 Sir Tim Berners-Lee developed the world’s first web server and web browser. The crucial underlying concept was that of hypertext, hyperlinks or links. The ability to navigate seamlessly from one web page to another by clicking on blue underlined words. And though the experience has become far richer and more interactive in the intervening decades, the web is still dominated by the 2D metaphor of pages. But while the PC and internet have been stuck on 2D the computer games industry and Hollywood are leaving it behind as they swiftly move up to the third dimension. Games software has long been there of course, on high end consoles in particular which are adept at immersing players in realistic alternative realities. But Nintendo revolutionized the hardware side of the industry in 2006 when it launched the Wii, with it’s magic-wand like controller converting players’ physical movements into corresponding 3D on-screen reactions.

In 2008 the movie industry signalled a seismic shift in the future of film production when big name directors Peter Jackson, James Cameron and Steven Spielberg committed to shooting most of their new films in 3D. Cameron, who hasn’t directed for the silver-screen since ‘Titanic’ is currently preparing for the December launch of big-budget ‘Avatar’ for which he himself pioneered much of the 3D camera technology. As for the major animation studios their output from now on will be entirely shot in 3D.

Where the silver-screen leads the small screen follows and Sky announced in July that it will launch 3D television in 2010. Sony and Panasonic say they will release home 3-D TV systems next year while Mitsubishi and JVC are reported to be working on similar products.

The message to the computer industry is clear – get with the program! (if you’ll excuse the pun). Children are growing up immersed in 3D game environments and media. They interact with interfaces rich in 3 dimensional controls. They make rapid fire judgments based on visualizing scenarios where depth is as important a positional cue as height and breadth. And collaborate with one another to achieve mutual goals.

They’re growing up with virtual worlds. And the 2 dimensional metaphors of pages and windows will seem as limiting to them as the blinking command line would now seem to us. 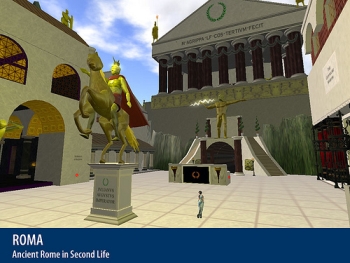 So what exactly is a virtual world? One definition is “an interactive simulated environment accessed by multiple users through an online interface”. There are many different types of virtual worlds, but five features are common to all:

1. Graphical User Interface: the world depicts spaces visually, in immersive 3D environments.
2. Shared Space: the world allows many users to participate and collaborate at once.
3. Immediacy: interaction takes place both synchronously and asynchronously.
4. Interactivity: the world allows users to alter, develop and build customized content.
5. Persistence: the world’s existence continues regardless of whether individual users are logged in.

In effect a virtual world is an online environment in which students can congregate and collaborate, regardless of where they are physically situated. 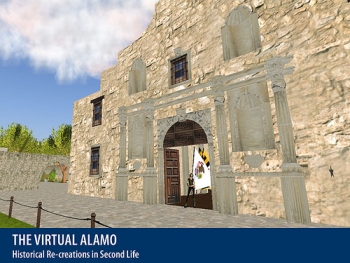 Rather than merely reading about a historical event, for example, students can re-create and re-enact that event by stepping into a highly engaging virtual model and interacting with the objects and characters of the time. Shakespearean plays could be acted out inside virtual sets and props. French could be practiced while walking down a virtual Parisian street, conversing with French children!

The consultancy Kzero recently reported that membership of virtual worlds grew by 39% in the second quarter of 2009 to an estimated 579 million worldwide. Meanwhile market research firm Stratey Analytics says the fastest growing demographic is children between the ages of 5 and 9.

In a recent Guardian article columnist Victor Keegan wrote, “Girls used to grow up with their dolls; now they are growing up with their avatars. As youngsters get older they will be looking for more sophisticated outlets and for ways to link existing social networks such as Facebook or MySpace to more immersive virtual worlds. With technology moving so fast and a whole generation growing up for whom having an avatar is second nature, virtual worlds have nowhere to go but up. Only they won’t be virtual worlds – just a part of normal life.” 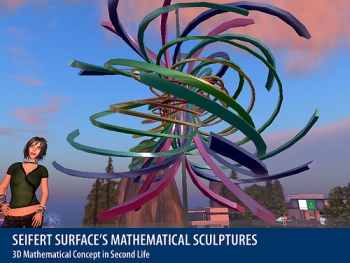 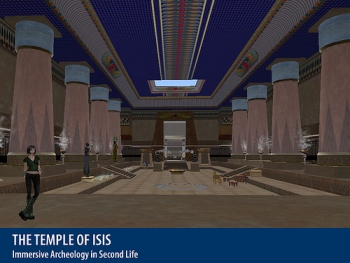 While younger users hang out in virtual worlds suitable to their age group, Second Life is the venue of choice for the 25yr+ demographic and especially educators. Second Life claims 19 million registered users, though a much smaller fraction are active participants. In 2007 the company behind Second Life – Linden Labs – released the code for the viewer software (which you download to your PC to log in to the world) under an opensource license. This gave programmers an opportunity to reverse-engineer the server software and the Opensimulator project was born. Two years on and it claims 95% of the functionality of Second Life, expecting to accelerate beyond it’s predecessor in 2010. That’s because major IT corporation like IBM, Intel and Microsoft are devoting much engineering time to its advancement as well as developing large Opensimulator worlds for their own use. 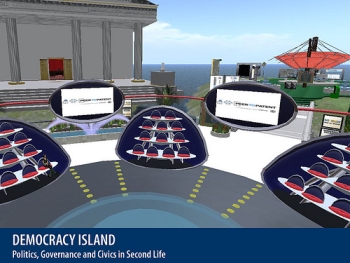 In fact Opensim has quickly emerged as a clear favourite to become the de facto standard for the 3D web, the next stage of the internet. While Second Life will continue to be an important laboratory Opensim promises to unleash the federated 3D internet. Parallels can be drawn with the early evolution of the web. Back then proprietary, walled-off services like Compuserve and AOL dominated. But they eventually succumbed to the innovation of the open web.  Similarly Second Life is a walled-off proprietary service now facing the competition of a compatible, open service where rapid innovation is taking place. The advantages that Opensim has over Second Life include:

1) Cost: Tying down the exact cost of building on Second Life is quite complicated but in order to do something worthwhile you really need to rent a simulator (also called a sim, or ‘island’), the cost of which will run into thousands per year. With Opensim, on the other hand, you have the option of downloading it free of charge and running it on your own server (if you have highly-specified hardware). Alternatively you can have a sim hosted by one of the many hosting services at a fraction of the cost of Second Life.

2) Modularity: The Opensim server is built as a modular system which means you can pick and choose from various options in its configuration. While Second Life uses a specific physics engine for example, you could chose one particular physics engine in Opensim, perhaps a gaming engine, for historical re-enactments, while choosing another to create an in-world science laboratory. 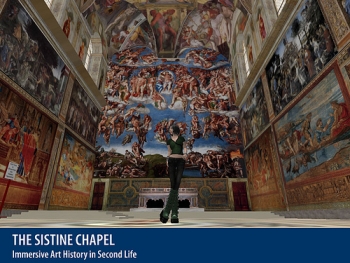 3) Openness: Because it’s an open-source system for which any programmer can examine, rewrite and insert new code, Opensim is developing at a rapid pace as so also are third party tools. The client viewer software through which you access the virtual world comes in a variety of options including a browser based version with which you can navigate the world through an ordinary web browser. This makes it highly compatible with touch-screen interactive whiteboards.

4) Sharing: With Opensim you can export and save all your work including every object you build, the landscape and your avatar’s clothes. You can then easily share these items with other classes and schools.

5) Hypergridding: when retracing the history of the World Wide Web above we referred to the crucial underlying concept of hyperlinking – the means by which we navigate seamlessly from site to site by clicking on trigger words and images. Hypergridding is the corresponding means in the 3D web of travelling from virtual world to virtual world. In Second Life one can teleport (travel instantly) from place to place, but there is no concept of teleporting outside of Second Life and back again. On the contrary Opensim has pioneered the Hypergrid protocol which allows you to navigate from one distant world to another. This feature alone has huge implications for education. For example School A could re-create a historically precise model of the monastic settlement at Glendalough and instead of having to make their own copy School B could be invited to teleport from their own sim into School A’s Glendalough sim for a virtual field trip. 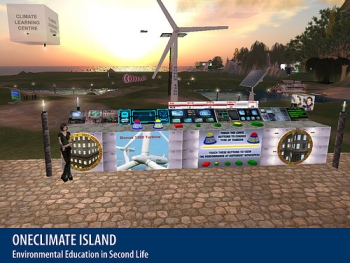 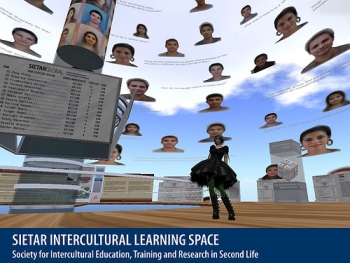 Sony announced the Playstation Motion Controller – their answer to Nintendo’s Wii – at the E3 interactive entertainment convention in early summer. And promptly had their thunder stolen by Microsoft with the announcement of Project Natal for the Xbox – a camera-based tracking system which allows the game player to use his whole body as the controller. This system is another massive breakthrough in immersive 3D. Instead of merely controlling a virtual object within the game Project Natal allows the player to virtually step inside a make-believe world and control his avatar like a digital marionette, mimicking his every move. Another barrier to the suspension of disbelief has been removed – the avatar is the player.

The question is – how can we possibly hope to keep students engaged in class when the technology they use at home surrounds them in a richly compelling alternative reality? Our children won’t be WIMPs – they’ll be 3D navigating, virtual object manipulating, parallel world architecting cybernauts.